The FIM, IRTA and Dorna Sports can now reveal an updated calendar for the 2021 FIM MotoGP™ World Championship as the beginning of another exciting season of racing appears on the horizon, with testing action set to get underway in just over a month.

The season opening Grand Prix in Qatar remains confirmed for the 26th to the 28th of March and it will now be followed by a second event, the Grand Prix of Doha, at the same Losail International Circuit the following weekend, from the 2nd to the 4th of April. The Autodromo Internacional do Algarve in Portugal will then host the third round of the Championship from the 16th to the 18th of April before the paddock heads to the Circuito de Jerez-Angel Nieto as previously planned. 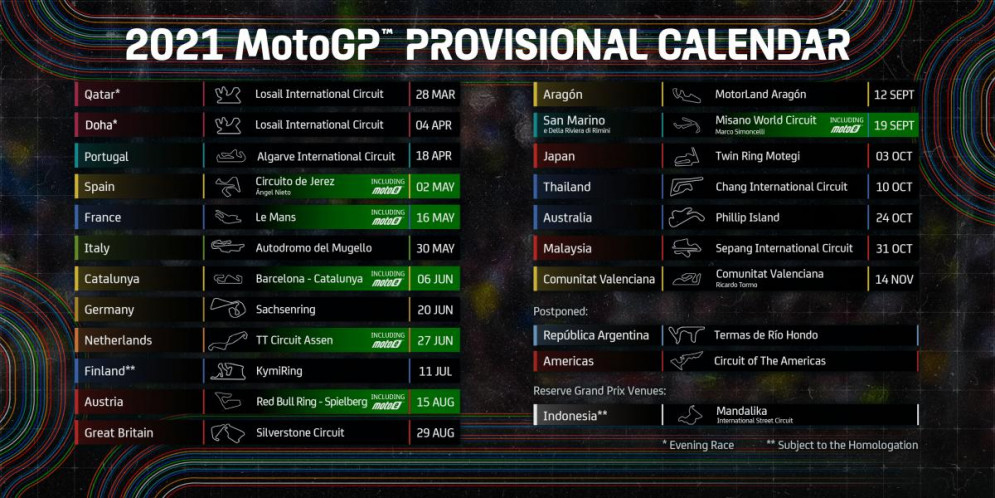 After Jerez, the traditional meander through Europe takes place: France, Italy, Catalunya, Germany, Netherlands, Finland (subject to homologation), Austria, Great Britain, Aragon and San Marino all go ahead before it will be time for the flyaway races in October – starting with Japan and ending with Malaysia. Valencia then hosts the season finale from the 12th to the 14th of November.

The ongoing Covid-19 pandemic and resulting lockdowns and complications sadly oblige the postponement of both the Argentina GP and the Americas GP until the last quarter of 2021, with the Mandalika International Street Circuit in Indonesia being placed as a reserve Grand Prix venue, subject to homologation.